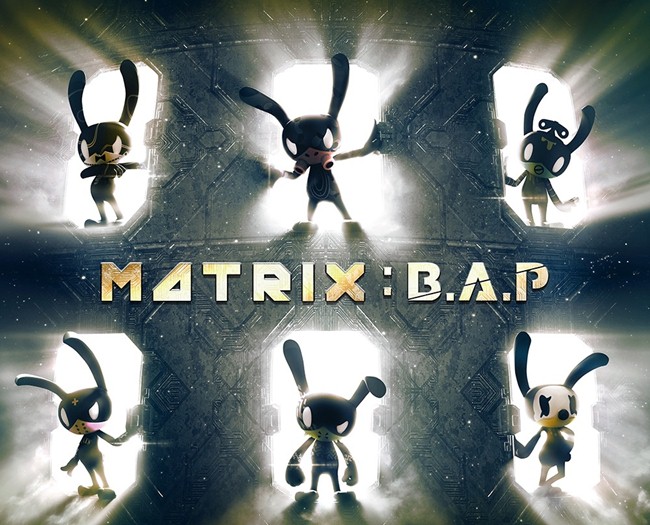 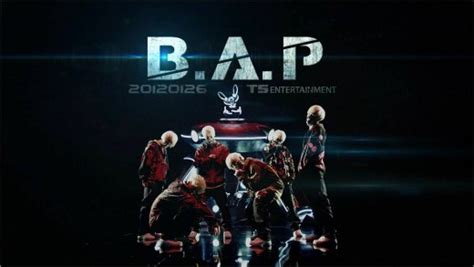 b.a.p is a korean group predebuted in 2011 and debuted later in january 2012 under ts entertaiment and unofficially disbanded in 2019
the group was composed by 6 members, rappresented often as concept by masked alien bunnies from mato planet called matoki

the lyrics are one of the main point of the group having critical strong language talking about society problems and wanting to bring justice (and what made me a fan in 2014 honestly, but i think even 2013 not remember well passed many years), sometimes direct dissings, balanced by sometimes lively cheerful to life, motivational lyrics, some songs written in busan dialect, all different from the alien rabbit bad-boy image they had at start even if the described lyrics was already there
the songs have different genres, from kpop, traditional korean instrumental, rock, rap, ballads, rnb, electronic to jazz; the b.a.p's instrumental often is accompanied by a whistle sound/rythm that became a mark into the music and fans bringing them for loud chants into the concerts paired with the classical green lightstick

(add links)when debuted they was at first introduced with a mtv korea program called "tadah it's b.a.p" presenting the group with with a fictional story, that can count as matoki lore, that was honestly a very weird fever dream: the bunnies gained energy from high frequency birds in matoplanet but the birds became engagered so the matoki decided to go in expedition to earth and found that could gain energy by fangirls chanting and study human behaviors; (i need to make some matoki gifs from tadah and put it in this page)
matoki is present basically everywhere as b.a.p mascots and almost always as album cover also official logo and lightstick, they used to have even a phone videogame (i had bought it on playstore and was quite fun, i think i can find the .apk somewhere still), figures, and Earthventure comic

(add links)at the start, they was even called the early 3rd generation "monster rookie", recognized as dangerous rivals of groups like bts and exo, the especially the first as debuted a year later 2013 using at the time very similar contept and style, with warrior b.a.p started to releasing mini-albums and singles one after another in just few years skyrocketing
(ps. honestly never got into the fandom war as i was bap-exo fan and friend with bts fans during their danger era lol, nowdays don't like anymore bts because changed style drastically though, also unfortunately army fandom changed in bad slowly after i need you)

the decline of the slow group popularity started when spoken direclty with actions about being against the actual kpop idol system, going against ts entertaiment with lawsuit for work mistreatment and unfair profit distribution as they was litteraly milking hurting them (awful things...it was heartbreaking) made them gain trust from the kpop comunity yet losing many fans during the hiatus (i remember too well that period damn it felt a desert)

(incomplete add more) after short time they returned again with "young wild and free" celebrating that return but things wasn't like before and as a fan just like other babyz i was very worried for what was happening fortunately in 2019 all left ts entertaiment for the best, to nowdays they're all solo artists and yongguk direct too his own music agency

to me b.a.p are a lot, the first song i've heard was probably "1004 (angel)" but the second "one shot" impacted me more, my favorite song is probably "goodbye", it always cheered me up in the worst time, to never give up and to say goodbye to the hurtful past,
a lot of their lyrics touched my heart and made me company when i felt alone during my adolescence, no kpop group will reach the impact they had to me;
other songs i love are: "what the hell", "wake me up" and "dystopia", as an italian fan the important one is "fermata" and as a babyz "b.a.b.y", the favorite happy song are: "carnival", "stop it" and "be happy", also wish i could go to their only concert they had here in milan in 2016 so bad T.T, but i'm happy to be a b.a.b.y.z even from afar ^^
my fav b.a.p member is daehyun and yongguk: daehyun is numer 1 with powerful high notes yet soft low notes his ballads are the best, about yongguk is probably one or the last rappers i still like and respect nowdays, passionate in what believes and his music and like i've alredy said his lyrics are extraordinary, love his very low voice and slower but meaninful rap, he never disappoint me.
(continue, insert individual text and images)